Bible Basics 4 – How Do We Know When to Read the Bible Literally or Figuratively? 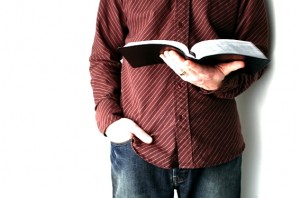 So, how do we know when to read the Bible literally vs. reading it figuratively?  Well, again, as we’re going to see over and over again:  we make that decision the same way that we do it in normal conversation.   And basically, the way we do it in normal human conversation is that we assume the language is literal until contextual evidence suggests otherwise.

In other words, we normally start with the assumption that people are speaking literally.  We only start to look for more figurative meanings when there are good reasons to do so.  We do this, for instance, when:

1.  The literal meaning can’t be true:  “It killed me when the Broncos lost last night!” – really?  Then how are you  telling me this?

2.  There are obvious indicators of figurative language in the context:  “He’s a yellow-bellied, good-for-nothing, low-down snake in the grass!” – which could be a technical description of someone’s pet snake…but probably not.

3.  There is a clear indication of a literary genre which is closely associated with figurative language:  “I think of you and nearly faint, but don’t take this as a complaint, you overflow and fill my cup and I could nearly eat you up!” – creepy, but probably not a threat from a cannibal (…but you might want to lock your doors just to be safe).

That’s not all the kinds of evidence that might make us think that figurative language could be in use, but you get the point:  we can usually tell in context if someone is speaking literally or figuratively and we can do the same thing when reading the Bible.  So, start with the assumption that a passage in the Bible is using plain language, but be on the lookout for evidence that figurative language is in use.  God – and the authors He inspired – want you to understand the intended meaning of each passage, so they won’t try to trick you into thinking a passage is using plain language when its actually figurative or vice versa.  The clues are usually right there in the context if we just remember to be on the lookout for them.