You are here:
ApologeticsBibleHistorical Jesus 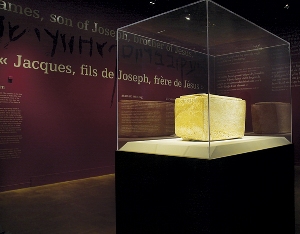 In 2002, a remarkable find was announced to the world:  an ossuary or bone-box with the Aramaic inscription translating to “James, son of Joseph, brother of Jesus.”  Given that the box itself dates back 2000 years and that it was very unusual to put a brother’s name on a funerary inscription unless the brother was someone very well known, there was widespread belief that this ossuary belonged to James, the brother of Jesus of Nazareth.  If authentic, this provides an important piece of evidence supporting the historical reliability of the New Testament.

As you might imagine, though, the authenticity of this find was immediately questioned, most vocally by the Israeli Antiquities Authority.  That the box itself dates to the first century AD has been firmly established, but controversy has raged around the accusation that the inscription was forged.  This controversy ultimately resulted in a 5 year forgery trial.

Moreover, Biblical Archaeology Review has just issued a press release with numerous lines of evidence that they claim demonstrate beyond all reasonable doubt that the inscription is authentic.  You can read all their details here.

The James Ossuary provides yet another piece of impressive evidence that the New Testament is a historically reliable text.  For more such evidence, register now for the 2012 Word Conference in Denver, Colorado.