Did you hear the one about Jesus’ wife?

You are here:
ApologeticsBibleHistorical Jesus 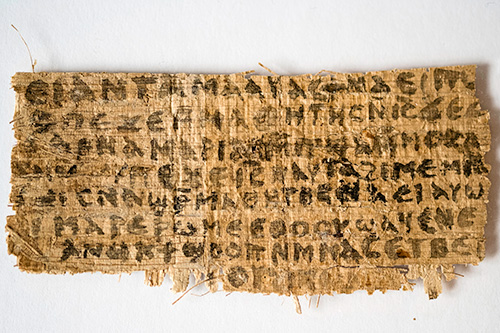 Ok, that sounds like the beginning of a cheesy joke, but the truth is no laughing matter.  The recently revealed “Gospel of Jesus’ Wife”, as some media outlets took to calling it, is yet another example of modern skepticism about the reliability of the canonical Gospels.  It’s hard to get anyone to pay attention to new archaeological evidence that supports the accuracy of the biblical Gospels, but any suggestion that the theygot it wrong generates a media firestorm.  Yet when the controversial “evidence” turns out to be a likely forgery, the media drops the story quietly, leaving the general public still operating under the assumption that the reliability of the Gospels has taken a serious hit.

In case you missed all the hubbub, here’s a quick recap on the “Gospel of Jesus’ Wife”:

For obvious reasons, it is the fourth line that has generated all the buzz.  Let’s be clear, however:  even if this fragment of text is proven to be authentic (more on that in just a moment) this would only mean that someone in the ancient world thought (or wanted other to think) that Jesus had been married, not that he actually was married.  Here are the possible implications:

Option #1 – If the fragment is authentic and if it translates an older Greek text, then it would mean that someone in the 2nd century (King’s suggestion) wanted people to think that Jesus had been married, perhaps because they believed so themselves or for other less honest reasons.

Option #2 – If the fragment is authentic but does not translate an older Greek text, then it would mean that someone in the 4th century wanted people to think that Jesus had been married.

Option #3 – If the fragment is not authentic, then it means that someone in the modern era wanted people to think that Jesus had been married.

At most, this fragment only points to the existence of someone who wrote that Jesus had been married.  Even King herself has been quick to point out that this fragment in no way offers meaningful evidence of Jesus having actually been married.  And remember, this all presupposes that the fragment is authentic, a presupposition that has been vehemently opposed by numerous experts in the field.

King did have additional scholars weigh in on the authenticity of the fragment before going public with it.  Roger Bagnall  of New York University and AnneMarie Luijendijk at Princeton reviewed the fragment and pronounced it likely to be authentic.  Luijendijk even went so far as to say it would have been impossible to forge.  This was quoted by the New York Times in their article about the fragment on Sept. 18.

In spite of these attestations, numerous other experts in the field have strongly questioned the authenticity of the piece.  Craig Evans, who will be speaking on this subject at the upcoming Word Conference in November, sums up what appears to be growing into the majority opinion:

Is the Coptic papyrus, in which Jesus speaks of his “wife,” a fake? Probably. We are far from a “consensus,” but one scholar after another and one Coptologist after another has weighed in pointing out serious problems with the paleography, the syntax, and the very troubling fact that almost all of the text has been extracted from the Gospel of Thomas principally from logia 30, 101, and 114. I suspect the papyrus itself is probably quite old, perhaps fourth or fifth century, but the oddly written or painted letters on the recto side are probably modern and probably reflect recent interest in Jesus and Mary Magdalene. [2]

In short, many scholars believe the papyrus itself is ancient, likely dating to the 4th century, but the text (or most of it) is a modern addition.  Several articles have been published which demonstrate how such a forgery could be accomplished and where the language might have been taken from.

Here’s the more interesting question:  have you heard about this growing consensus that the “Gospel of Jesus’ Wife” is a forgery?  And if not, why not?

Is it because the news media was quick to promote a story that seemed to call into question the reliability of the canonical Gospels (though this would be a stretch even if authentic) but has given little or no attention to the fact that this piece of “evidence” is likely meaningless?

Our culture’s skepticism about the reliability of the Bible is a two-edged sword.  On the one hand, it can undermine people’s trust in the Bible but on the other hand, it demonstrates that people are still very interested in the person of Jesus and in the truth about his life.

What we cannot do is leave answering our culture’s questions about Jesus to the news media or the purveyors of popular culture. We have to be equipped with solid facts to speak into the conversations taking place around us.

Please join us for the 2012 Word Conference in Denver where you’ll be equipped with precisely the kind of facts you’ll be able to use to quench the thirst of a culture desperate for Truth.